A friend sent a link at the Knight Science Journalism Tracker, which you should read, that links to a Popular Science article, which is kind of meh, purporting to list the 10 Best Fictional Laboratories.Â  Its a click-bait article, as most of these Top X things are.Â  I can’t even disagree with their list, but it felt a bit lazy in their descriptions and their justifications, which just linked to other PopSci materials.

To save you from hitting the NEXT button nine times:

Of course, this should be in descending order, but its easier to just hit the list button.

Its not overly objectionable, but I think I can do better for you.

Veridian Dynamics was the all-encompassing R&D megacorp from the short-lived workplace sitcom, Better off Ted. It was full of wide-eyed, earnest scientists and evil corporate stooges looking to cure the world’s ills, especially the ones its marketing department created. It was surprisingly science literate for a sitcom, but my favorite bits were their parodies of corporate branding advertisements.

The winter before last I came down with pneumonia and spent the week watching Eureka on Netflix and vomiting so hard I burst the blood vessels in my eyes. (Those two things are related, mind you.)

The central conceit of the series is that it took place in a secret government-funded laboratory/think tank (and accompanying small town) where researchers worked to create all sorts of sci-fi gadgets and gizmos to both destroy and create. Good times. Global Dynamics was the RAND Corporation-like home of the lab with seemingly infinite resources. A handsome Secret Service agent turned Sheriff was at hand to apply common sense solutions to the experiment gone awry-of-the-week

This one is a personal favorite. In one fictional universe, Yoyodyne Propulsion Systems is the New Jersey home of the evil Red Lectroids of Dimension 8 in the cult classic The Adventures of Buckaroo Banzai Across the 8th Dimension. They arrived on Earth just before the Halloween of 1938, landing in Grover’s Mill, NJ, after being exiled from their home dimension.

Led by the evil Lord John Whorfin (they’re all named John in Dimension 8), they learned to channel their evil in the most direct way possible, by becoming a post-war government contractor.

In another universe, Yoyodyne is the government contractor featured in Thomas Pynchon’s V. and The Crying of Lot 49, which inspired the reference of the name in Buckaroo Banzai, but also in the TV show Angel, Start Trek: The Next Generation and others.Â  There’s even a real Yoyodyne in New Jersey, a motorcycle parts manufacturer in Morristown.

7.Â  The Fortress of Solitude

An icy fortress where one superhuman goes to think and conduct research for the benefit of mankind. I know what you are thinking: Superman, really? Just because PopSci included a DC comic book reference, you can’t tell me that Superman’s Fortress of Solitude is a better laboratory than the Bat Cave!Â

And you are right, my straw reader, quite right. But I’m not referring to Superman’s Fortress of Solitude, I’m talking about the original.

The Fortress of Solitude of Doc Savage, the pulp polymath himself, predates Superman’s Fortress by at least a decade. Like Supes’, its in the arctic and its where an impossibly perfect hero goes to find comfort, rest, and work on engineering and medical projects. The Fortress is where Doc Savage created such amazing inventions as the automatic transmission, night vision, machine pistols and the answering machine, long before they were created in the real world.Â  When back amongst us mere humans, Savage had a cool lab/apartment/office on the 86th floor of the Empire State Building.

Unlike the Man of Steel, the Man of Bronze earned his physical toughness through a steady regimen of workouts and healthy eating. Superman’s a poseur in comparison.

If we are going to invoke DC Comics, we should recognize the foremost laboratory in their universe:Â Scientific and Technological Advanced Research (S.T.A.R.) Labs. Not only is S.T.A.R. home to some of the greatest minds in Research and Development, its also a franchise! Nearly every popular location on Earth (or Earth 2, depending on whether or not DC has gotten mired in its own backstory again) has a local S.T.A.R. lab outlet. Convenient!

Dr. Richard Daystrom had a vision: What if we could take all the fun out space exploration and just let drone starships do the work for us? It will leave us free to do…I dunno…something.

In the classic Star Trek episode “Ultimate Computer,” Daystrom creates an artificial intelligence to automate the USS Enterprise (with Starfleet’s blessing), which quickly goes out of control attacking and destroying the USS Lexington and USS Excalibur during war games (without Starfleet’s blessing).

Despite Dick Daystrom’s failure, his legacy carried on in The Daystrom Institute, a center of advanced learning, the particulars of which were never quite clear yet seemed to be quite prominent in Star Trek: The Next Generation and subsequent series (and their novel tie-ins).

To be honest, I never liked the Doctor Who spin-off Torchwood, but the concept was cool. Beneath Roald Dahl Plass stood a secret institution first created by Queen Victoria (to prepare against the Doctor, mind you, but later co-opted by pro-Doctor forces) to create defenses against alien invasion. They’d apply alien artifacts, recovered on Earth, to the defense of the planet…and further the glory of the British Empire. The Institute’s rich background history really added a great dimension to Doctor Who (and later its own, rather icky, series).

3. The Banzai Institute for Biomedical Research and Strategic Information

I can’t reference Yoyodyne without including the The Banzai Institute, home of Buckaroo Banzai, later responsible for the downfall of the Red Lectroids. Adding to the circular nature of things here, Buckaroo Banzai was created as a modern take on Doc Savage. Like Savage, he was a physician, physicist, inventor, musician, adventurer and all around awesome guy (Buckaroo lacked the physical perfection of Savage, but played the micro trumpet really well). 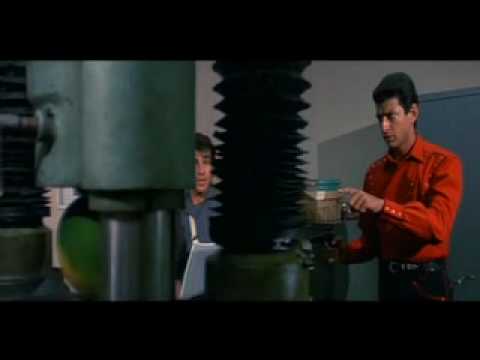 Unresolved: The Deal with the Watermelon

Where Savage had the Fabulous Five (companions who were all the tops in their respective fields, except where that might have overlapped Doc Savage’s awesomeness), Banzai had the Hong Kong Cavaliers, who helped create his oscillation overthruster (enabling Buck to cross dimensions) and also formed his backup band.

The Banzai Institute was Buckaroo’s home base for both science and adventure. Other than the rocket car, brain surgery and the dimensional thing, they never really got into the goings on at the Banzai Institute. All you have to know is that it was impossibly awesome. This place has got everything.

Where PopSci goes for Iron Man, the true genius of the Marvel Universe is Reed Richards of the Fantastic Four. They make their headquarters at the Baxter Building, which serves as both Reed’s lab (where unstable molecules rule!) and the launch point of some wacky out-of-this-world adventuring.

Too bad their movies were just awful. The FF work best when they’re out gallivanting across dimensions, not when they’re in some crummy action flick.

From Michael Crichton’s Andromeda Strain (and the movie of the same name).Â  Wildfire was a government program that led the study of the deadly alien microbe “Andromeda” that murderized everyone in Piedmont, AZ. Fortunately, the microbe mutates to a nonlethal form, so Crichton had to throw in some panic, some random epilepsy, and a nuclear bomb to spice things up.

Beneath an unassuming USDA agricultural station hid the Wildfire Laboratories, a high tech labspace that rivaled the Baxter Building for its impressive features and the USS Enterprise for its use of the self-destruct button.Â  The Wildfire Laboratories were designed in that cool, white and futuristicÂ  60s-70s’ Tomorrowland sensibility. Dig it.

When they designed the new vivarium at work, I was disappointed the decontamination chamber didn’t involve stripping naked to be irradiated by exfoliating UV light. Oh well.

Dr. Leavitt, don’t look at the light. Oh, its facing the other way? Why the seizure then? Oh, and you’re no longer a man in this version!

Why I Don’t Go In The Water: Blobfish Voted World’s Uglies…t…HEY, What the…!?